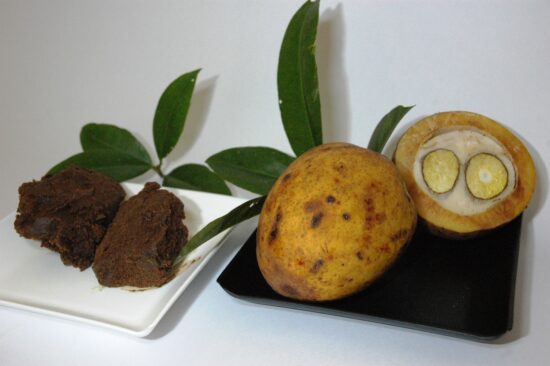 The fatty acid composition of the bacuri butter (Platonia insignis) has a high absorption rate, due to its high level of tripalmitin (50 to 55%), which penetrates the skin quickly. The high value of 5% of the fatty palmitoleic acid, compared with other oils that have not more than 0.5 to 1.5%, qualifies the bacuri butter as a fantastic emollient which can also be used as a moisturizing agent.

The bioactive ingredient tripalmitin is used in pills to chew for having slow hydrolysis. This reduces the side effects of strong medicines measuring out the drug quantities which has to be always absorbed by the organism, according to pharmacokinetics. The current source of tripalmitin in the world is a plant commonly called the (uruchi) Japanese wax that is original from Japan. 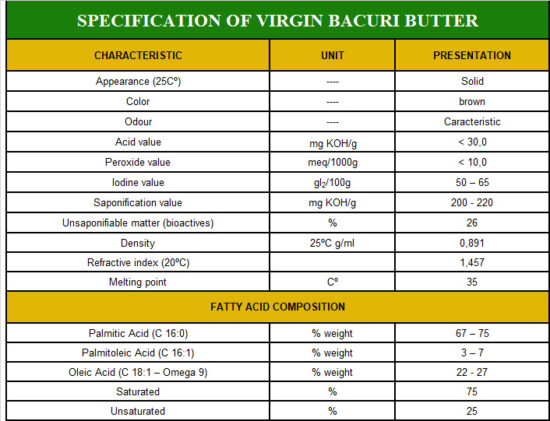 The bacuri fruit is highly demanded in the markets of Belém and used for the preparation of sweets, cakes, jams, juices, and ice creams. Its seeds are not used and are discarded. The local population s of the central region of the Marajó island have great difficulty removing the butter from the seeds because the seeds have to be soaked in water for over a year. They are then boiled and the butter is skimmed off the surface of the boiling water. The butter has phytotherapeutic applications and is popularly used on Marajó as a remedy against spider and snakes bites, as a treatment for skin problems and earaches, and is considered to be a miraculous remedy against rheumatism and arthritis. The butter of bacuri gives a golden tone to the skin. It is absorbed a few minutes after it is applied and the skin becomes velvety to the touch; it also removes spots and reduces scarring.

The bacuri is native to the state of Pará, where the highest concentrations are found in the Salgado, Bragantina, and Marajó island regions. This tree can reach 25 m in height and 1.5 m in diameter. Grows on terra firme and provides a yellow-colored timber, compact, resistant, not rotting, therefore used in naval construction. The fruit, which weighs 250 g on average, has an oval shape covered by a shell, whose thickness varies from 0.7 to 1.6 cm, representing 75% of its weight. The edible part corresponds to the endocarp and represents 13% of the weight of the fruit. It is white, with a strong aroma and sweet taste. The fruit has normally 4 oily seeds, when dried (moisture content of 20%), contains 72% of a fat, which is resinous dark brown, almost black. The fat has an unpleasant smell and filtration is difficult. By pressing approximately 40% of its butter can be obtained. It is estimated that the average productivity per plant and year reaches 400 fruits. The species has a cyclical production performance, which means, years of high fruit production are succeeded by one, two, or three years of low production. Propagation is possible through seeds, roots, and grafting. Plants propagated by seeds only come into the production from 12 to 15 years after planting while the grafting method allows the plants entering the reproductive cycle five to six years after planting. 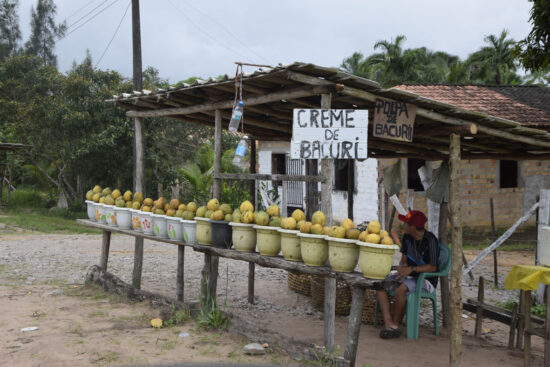