The brazil nut oil (Bertholletia excelsa) is highly nutritious, containing 75% unsaturated fatty acids composed mainly by palmitic, oleic and linolenic, as well as the phytosterols sitosterol and the fat-soluble vitamins A and E. An extra virgin oil can be obtained by the first pressing which can replace the olive oil for its mild and pleasant flavor.

The brazil nut is a source rich in magnesium, thiamine and has the highest known concentrations of selenium (126 ppm), with antioxidant properties. Some studies indicate that consumption of selenium is associated with a reduction in the risk of prostate cancer and recommends the consumption of almonds as a preventive measure.

The present proteins are very rich in sulfur amino acids like cysteine (8%) and methionine (18%) and the presence of this amino acid (methionine) enhances the absorption of selenium and other minerals.

Due to its anti-free radicals, antioxidants and moisturizing properties, the cosmetic industry uses the brazil nut oil in anti-aging formulations in preventing aging of the skin and is considered one of the best conditioners for damaged and dehydrated hair. 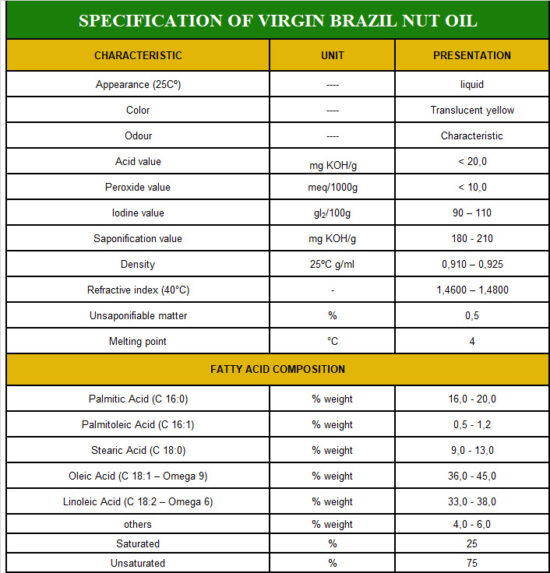 The brazil nut is widely used as an ingredient in cooking and in making cookies and ice cream. Its protein value of 18% is quite significant comparing it as “vegetable meat”, and the consumption of two brazil nuts equals the protein value of one egg. The milk of the brazil nut, similar to coconut milk, is used in the preparation of typical regional dishes. The brazil nut oil is applied in the hair and when exposed to the sun the hair becomes brighten and frequently used by teenagers and women in the prevention of cellulite. The preparation of a tea, leaving water for a few hours in the wooden capsule, is considered an excellent remedy for hepatitis, anemia, and intestinal problems. The oil of the brazil nuts can be used for cooking in salads and braise. 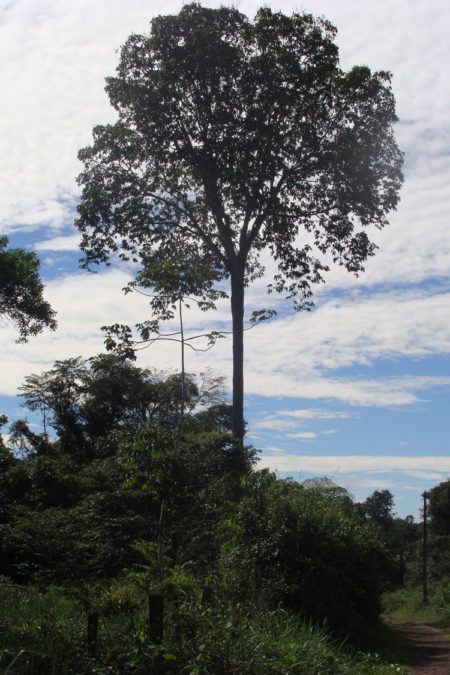 The brazil nut tree is one of the most important species of extractive exploitation of the Amazon, occupying a key role in the socio-economic organization of large areas of forest extraction. It is a very large tree, leafy and majestic, often reaching a height of 50 meters and more than 2 meters in diameter. The fruit of the Brazil-nut is a large capsule containing about 18 almonds (nuts). For the withdrawal of the brazil nuts the capsule has to be broken, which has a very hard woody shell and does not open spontaneously. Its wood is of excellent quality for construction and shipbuilding. Currently, the logging of native Brazil-nut trees is prohibited by law, but which does not prevent their planting in order to reforest either in pure systems or in mixed plantations. In mixed plantations with perennial and/or semi-permanent crops, a spacing of 12 m by 12 m is recommended, which corresponds to 69 plants per hectare. The seed germination occurs in 12 to 18 months and the first production is expected from the 12th year after planting. A mature tree produces an average of 125 liters of almonds (an average of 45 almonds per liter). The peeled almond posses about 70% of oil, with the oil press (without the use of solvents), 40% of it can be extracted, which that means, each tree can produce up to 50 liters of oil.