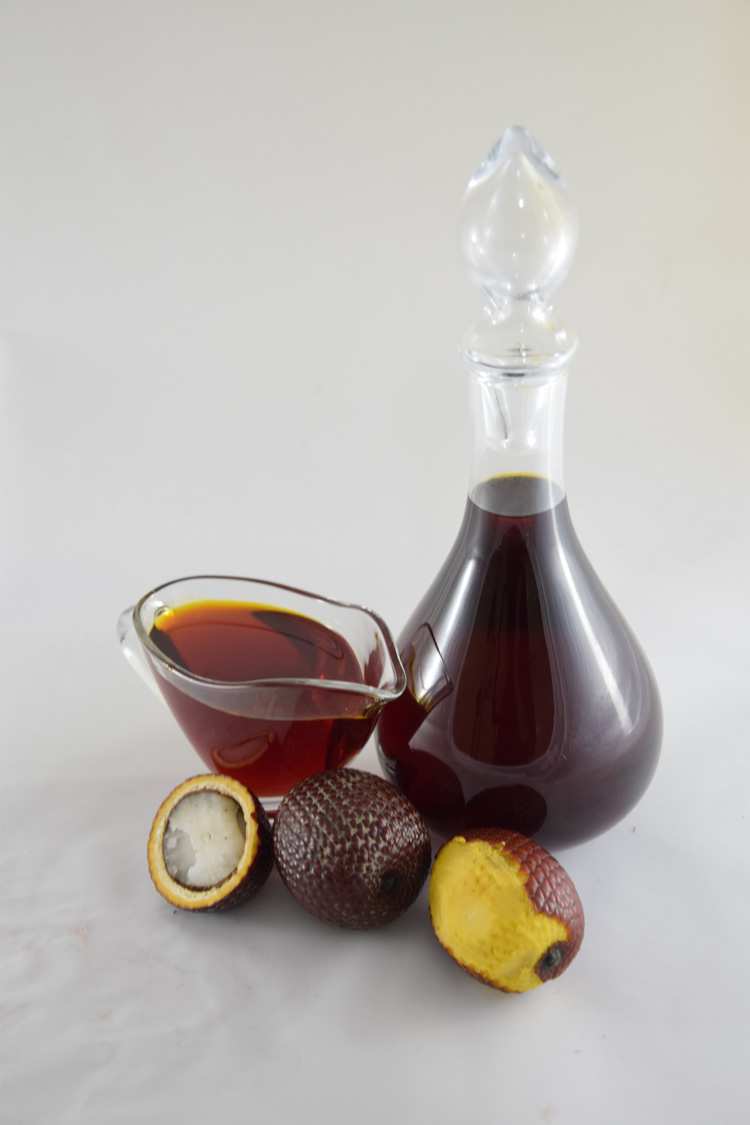 The buriti oil (Mauritia flexuosa) is very rich in oleic acid (72,5%), a type of monounsaturated fatty acid that is much present in olive oil, which is associated with a lower incidence of coronary heart disease. Furthermore, it is considered to be the richest natural source in beta carotene (30 milligrams/100 g pulp), exceeding 20 times of carrot. The beta carotene is one of the most powerful antioxidants, known for its large capacity for cell renewal, serves as an excellent natural skin peeling. Due to its ability to absorb radiation in the range of visible light and ultraviolet, the oil serves the cosmetics industry as an efficient solar filter that reduces the dryness of the skin. In anti-aging formulations increases the elasticity of the skin. 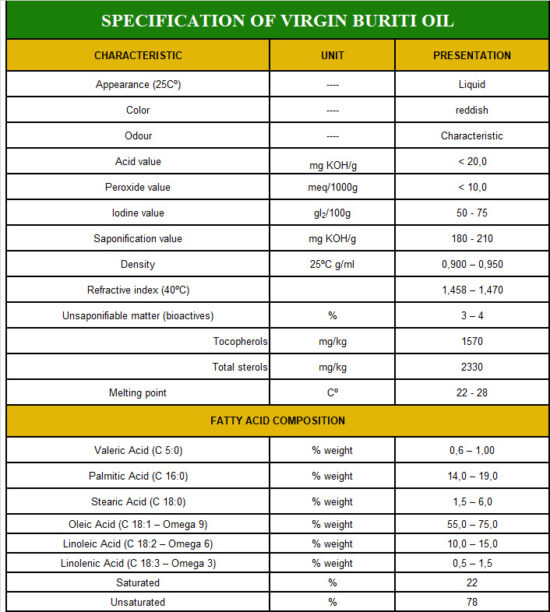 The buriti is a palm with multiple use. New leaves and their stalks are frequently employed in crafts, in the confection of baskets, the fruit pulp is processed into a juice called “wine” and sweets, which constitutes quite appreciated food in the Amazon region. The buriti oil, which is edible, is used in frying and applied on the skin against sunburns causing immediate relief and helping the healing. Due to its powerful detoxifying and allergic combating effects the caboclos treat snake and scorpion bites through the application of oil on the wound as well as intake of half a spoon of oil, and against asthma the daily intake of half a spoon of oil reduces the cough and relieve breathing. Currently, the fruit pulp is commercialized in local markets of the countryside for the production of “wine” that replaces açaí during the rainy period, from January to June, the low peak production period of açaí. There are companies which sell the fresh fruit pulp for the extraction of oil, and others prefer the dry pulp, called buriti flour, because the pulp is very perishable.

Buriti (moriche) is a palm tree (Mauritia flexuosa), which dominates expansive areas and covers nearly all central Brazil and the southern Amazonian lowland streams. It is an elegant tree that can reach up to 35 meters in height. Forms large leaves with a rounded crown. The flowers are yellowish colored and appear from December to April. It’s fruit-shaped ellipsoidal, chestnut color, and has a surface coated with shiny scales. The yellow flesh covers a hard oval seed, whose almond is edible, and fruiting occurs from December to June. The buriti palm naturally occurs alone or in communities, which require an abundant supply of water in the soil.

For this reason, they dominate in floodplains and swamps where the soil is soft and moist, which is a secure indication of the existence of a watercourse. Where they settled the water carried and spread over the floating seeds. The palm is a dioecious species, plants that form male and female individuals. Only those with female flowers fructify.

Around 60 female and 80 male buriti palms can be found in a hectare. An adult palm can produce up to 200 kg of fruit, which can be processed in 30 kg of flour or finally extracted into 5 to 6 liters of oil (flour contains 22% of oil). Assuming an average of 60 buriti palms per hectare 300 to 360 liters of oil can be achieved. The productive cycle is repeated every two 2 years, but there are communities that manage their natural buriti palm areas by cutting and withdrawing small and dried bunches and weeding of natural competitors and thus have a year with low and the other with high productivity. Complementary studies are needed for soil and climate to know if this management is responsible for the decline of the productive cycle.