Carnauba wax (Copernicia Prunifera) is used as an additive in various decorative cosmetics, such as lipstick to achieve greater stability even at higher temperatures. In particular waterproof make-up contains in its composition carnauba wax as it forms a water-resistant film, thus avoiding the spill of makeup. Also in water-resistant sunscreens, the carnauba wax is a major component. This natural wax is also often used in hair care products and skincare. The hair gets brighter and stronger and gives the skin more elasticity.

Carnauba wax is the hardest known natural wax and consists mainly of esters (85%) and long-chain saturated fatty acids (20-30) such as ceratin, carnauba acid, and saturated hydrocarbons. 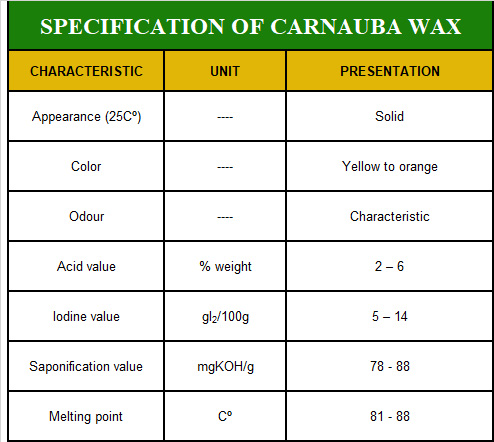 The palm of the carnauba offers innumerous uses: the fiber extracted from the leaf serves to produce handicrafts; the straw serves to cover houses; the fruits serve to feed the cattle; the trunk (stem), with indefinite duration, is used to make slats and rafters used in constructions; Also as a by-product, the crushed leaf, after collecting the powder, serves as fertilizer and with 7% protein can be used to feed sheep and goats.

The carnauba palm is resistant to drought, striking the semi-arid region of the Brazilian northeast and is found mainly in the states of Piauí, Ceará and Rio Grande do Norte.

The leaves are covered with a layer of wax which protects against intense droughts reducing the loss of water by evapotranspiration.

The wax powder is extracted from the leaves during the harvest period from August to December, without attacking and preserving the integrity of the palms, because the only mature foliage is cut. The leaves are dried in the sun and then beat to separate the wax from the leaves.