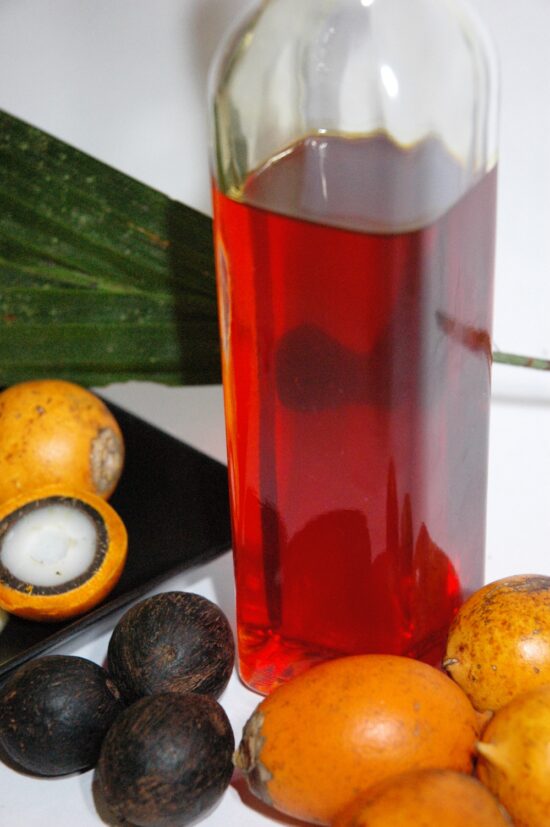 The tucuma oil (Astrocaryum vulgare) extracted from the pulp contains 25.6% saturated fatty acids and 74.4% unsaturated fatty acids composed of palmitic, stearic, oleic, and linoleic acids. As it is rich in omega 3, 6, and 9, it is a good moisturizer and is used in cosmetics in skin moisturizers, body lotions, and products for damaged hair. Tucuma oil is also an excellent emollient that spreads well. The value of beta-carotene (which is 180 to 330 milligrams/100g oil) is more concentrated in the oil than in the pulp. 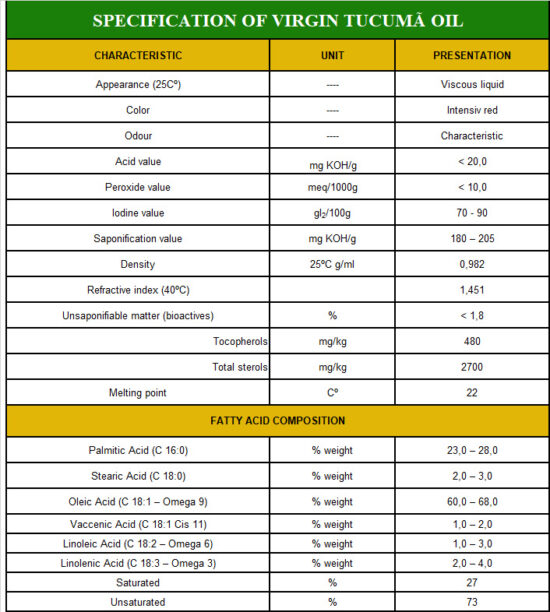 The fiber has many uses, the leaves provide a very resistant fiber, ideal for basketry, the seeds are used in handicrafts and the fruits are consumed raw or in the form of a juice called “wine of Tucuma,” which is mixed with water or made into ice cream. The pulp is very nutritious containing one of the highest concentrations of provitamin A “beta-carotene” (52 milligrams per 100 g pulp), equaling the value found in the pulp of buriti. In comparison, the concentration of beta carotene in carrots is 6.6 milligrams/100 g pulp. Its oil is used in cooking and in massages.

This species is native to the Amazonian region, possibly to the state of Pará, where it has its center of the distribution and reaches French Guiana and Suriname. It is a characteristic palm of terra firme, low vegetation cover, or even open fields. There are two species of Tucuma in the Amazon, Tucuma-do-Para (Astocaryum vulgare) and the Tucuma-do-Amazonas (Astrocaryum tucuma). The tree of Tucuma-do-Para is 10 to 15 m in height and regenerates easily by growing multiple stems, while the Tucuma-do-Amazonas can reach 25 m in height and forms a solitary trunk. Its fruits are also larger, and its pulp is fleshier, less fibrous, and less sweet than the pulp of Tucuma-do-para.

The Tucuma palm is considered a pioneer plant of aggressive growth, has the ability to grow new shoots after a fire, and mainly inhabits secondary forests and pastures. Seeds take up to 2 years to germinate, the plants grow slowly in cultivation, and start to produce fruits after eight years. There are some isolated oil palm (Elaeis guineensis) growers that are beginning to replace the oil palm with Tucuma even without receiving support from research institutions to genetically improve this species. Its resistance to diseases and high productivity make this species an alternative for the production of biodiesel since the operating costs of an orderly plantation is much less than that of the oil palm.

The seed of Tucuma-do-para is covered externally with orange oily pulp. On average, the fruit weighs 30 g; 34% of this weight corresponds to the external pulp that has 14% to 16% of the oil when it is raw. A mature tree can produce up to 50 kg of fruits per year (25 kg per tree on average), which corresponds to 2.5 kg of pulp oil and 1.5 kg of seed oil. In one hectare, 400 palm clusters can be planted, each cluster with three trunks. In total, this equals 1200 palm trunks and will result in 4.8 tons of fatty material per hectare, more than the oil palm, Elaeis guineensis, which produces only 4 tons of oil on average per hectare per year (assuming a harvest of 20 tons of fruits and an extraction of 22% oil). The advantage of Tucuma-do-para is that it forms clusters that do not need to be replanted, which is not the case for Elaeis guineensis.